TorGuard VPN was never intended to be a simple VPN service. It has a solid server network, various complex network capabilities, and a confusing array of account choices that allow you to customize your experience to your liking.

We’ll try to go deeper into the program’s features in this TorGuard VPN review. Our main concerns will be safety, services, performance, cost, and streaming.

Pros and Cons of TorGuard VPN

What Are TorGuard VPN’s Most Common Features?

TorGuard VPN is one of the most functional VPNs we’ve experienced, with plenty of sophisticated settings. It contains standard functions like auto-login and auto-connect. This is why we’ve compiled a list of the most key aspects of Torguard VPN so you can compare it to other VPN services.

Particularly when using the WireGuard tunneling protocol, TorGuard gives sufficient speeds. However, you should choose a country that is close by for the best results. We’d call TorGuard one of the fastest VPNs if the connections weren’t a problem. Some connections, though, were just unreliable. You could get decent speeds, but you’ll need to be careful about which location you connect to.

Your findings may vary depending on where you are right now. Connection and speed might be affected by factors such as your internet provider and usage limitations. As a result, the information shown here is just suggestive of potential results. They might be able to tell us how the servers of Torguard VPN impact the total speed of your connection.

There aren’t many changes among TorGuard VPN’s Windows, Mac, and Linux programs. The Linux operating system now has its own application. TorGuard’s iOS and Android applications are nearly identical. There are a few minor variations. The Android app has OpenVPN and Wireguard, but the iOS app includes IKEv2/IPSec and OpenVPN but not WireGuard.

You’ll get the same set of services regardless of the TorGuard VPN subscription package you choose, including more than 3,000 servers in 50+ countries, 8 simultaneous connections, and limitless bandwidth and speed. The subscription you choose is purely determined by how long you want TorGuard to be installed on your computer. 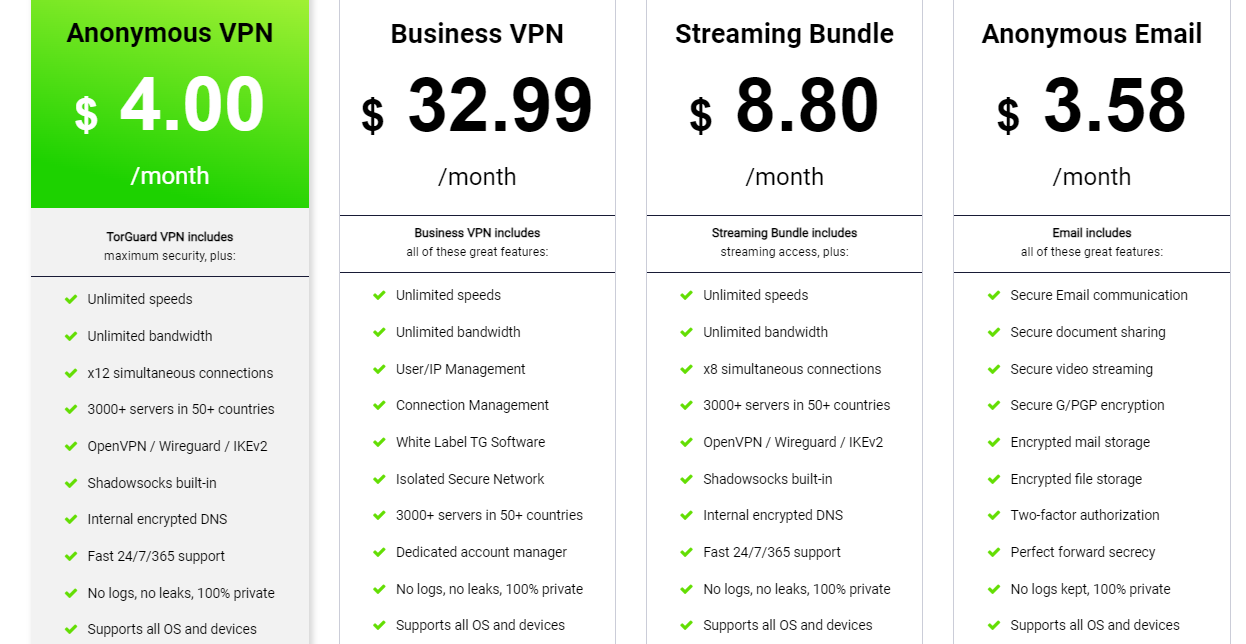 Is There Any Plan for TorGuard VPN Free?

TorGuard doesn’t have a free version that lasts indefinitely,  but it does provide a 7-day trial. To obtain it, submit a copy of your most recent VPN bill to [email protected]

TorGuard VPN is a safe option. It goes to great lengths to ensure that your browsing is as private as possible. Military-grade encryption, a choice of the best tunneling protocols (such as WireGuard), WebRTC and IPv6 leak protection, and a kill switch are all included.

Is TorGuard Good for Torrenting?

TorGuard VPN’s servers all accept P2P file sharing and torrenting. TorGuard VPN is compatible with torrenting software such as uTorrent and Vuze.

WireGuard, OpenVPN (UDP/TCP), and OpenConnect tunneling protocols are included in all TorGuard desktop programs. The kill switch, App Kill, script choices, and the ability to connect over a proxy are all available in desktop applications.

Despite the fact that TorGuard’s iOS and Android applications appear to be identical, there are a few variances. The Android app has OpenVPN and Wireguard, but the iOS app includes IKEv2/IPSec and OpenVPN but not WireGuard.

It offers eight simultaneous connections that are greater than the industry norms.  The standard level of TorGuard should be enough for most households.

TorGuard VPN is situated in Florida, the United States. It is not the most privacy-friendly country due to its membership in the Five Eyes Alliance.

TorGuard VPN promises not to gather any user activity logs in their privacy policy. To put it another way, your browsing behavior will not be traced (or kept) in any manner.

TorGuard VPN, like the majority of top VPNs, employs AES-256 encryption by the standard. When utilizing the OpenVPN tunneling protocol, you can select AES-128 as the encryption. You may also use the Blowfish encryption method (which can be a bit faster than AES)

TorGuard VPN boasts a lot of features, solid encryption settings, and fast torrenting speeds, so it’s a wonderful option for anybody looking for a good VPN for privacy and security. As a result, for power customers who want far more than the VPN essentials, this company is certainly worth considering.

If you want to further read about other VPN services you can read our What Are the Best VPN Services? article.

Great minds discuss ideas and thus other ideas grow! Join our forum to be in-the-know of the location-independent life.
Sign Up For Free!